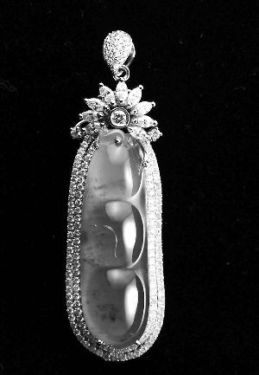 In recent years, the price of jade has risen considerably, even exceeding gold. However, from the second half of last year, some jade merchants obviously felt that business was worse than before. Since the beginning of this year, signs of loosening of jadeite jewelry prices have become more pronounced. Although the price of high-grade jadeite is still not moving, the prices of middle and low-grade goods have apparently declined.

Prices and prices fell, there was no market reporter found in a jewelry street in Taiping South Road, some of the gold-based gold shop mostly business is good, and sales of jade-based shops are extremely demanding. An owner who specializes in jadeite jade said: â€œIn the past, a good thing was placed in the store. If guests liked it, it would take a few trips. Now the same thing is in the store. Every time the guests come Look, but don't buy it."

This phenomenon is not individual. Mr. Hong managed two jade shops and in just a few years he replaced his Santana with a Land Rover. However, in the second half of last year, he began to feel the pressure: â€œStuffs cannot be sold, there is no money on hand, and many customers owe their debts.â€ At the end of last year, Mr. Hong gradually withdrew his funds from his business and invested in mahogany, Wood carvings and other artworks.

The price is too high is an important reason for the recent unsalable jade. Since 2005, the price of jadeite has been buzzed with an annual increase of more than 30%, and the increase in high-grade jadeite is even more impressive. Last year, banks ** tightened, hot money speculation enthusiasm subsided, jade has become priceless, prices have begun to loosen.

High-end emerald prices firm Nanjing jewelry expert Professor Zhang believes that the European debt crisis has an impact on the domestic jade market. He explained that in the past, the Burmese Jade Man also had European funds involved. Now that the European debt crisis is difficult to solve, it is inevitable that there will be withdrawal of funds, lack of financial support, and price loosing is natural. However, Professor Zhang also believes that the price of high-end emeralds is unlikely to drop sharply. Instead, the price of low-end emeralds is the least firm.

Some collectors also suggested that the price of jade should be properly squeezed out, which is beneficial to the future development of the jadeite market. When Jadeite rose, there was a suggestion that jadeite was an investment product that only went up and down. Now it is not the case. The drop in jadeite price has also dragged down the prices of Hetian jade and Shoushan stone and other collectibles. However, this person believes that the real good jade is worth collecting regardless of the market's ups and downs.