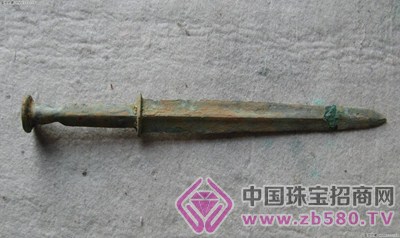 Recently, a bronze sword was unearthed in Chengyang District, Qingdao, Shandong Province. The sword was covered with green rust and the hilt was bamboo-shaped. According to preliminary judgments by the cultural relics department, this bronze sword is likely to come from the late Warring States period. The process of its discovery is also very interesting. It turned out that the workers screened out when the soil was sifted in the former Taolin community.

There is a sand pile on the east side of Building 42 in the former Taolin Community. Here is where the bronze sword was found. At about 6 o'clock in the morning, the old coke was sifted with a spade and shoveled a few times. I felt that the shovel had encountered a hard object.

Lao Jiao will hand over the bronze sword he found to the responsible person of the construction party. The reporter noticed that there was no engraving or writing on the sword. Although the blade was covered with copper rust, the sword tip and the blade were still very sharp. The workers measured the amount and found that the bronze sword was about 45 cm long and the hilt was about 8 cm long.

Although I don't know which period I came from, everyone felt that the sword had been buried in the soil for many years and should be old. The workers said that the place where the earth was excavated was not far away, just around an old house on the east side of the plot.

Is this sword a relic? The reporter then contacted the Chengyang District Cultural Relics Protection Management Committee Office. The staff said that judging from the shape of the sword and the hilt of the bamboo knot, this should be the bronze sword, from the late Warring States period, about 2,200 years ago.